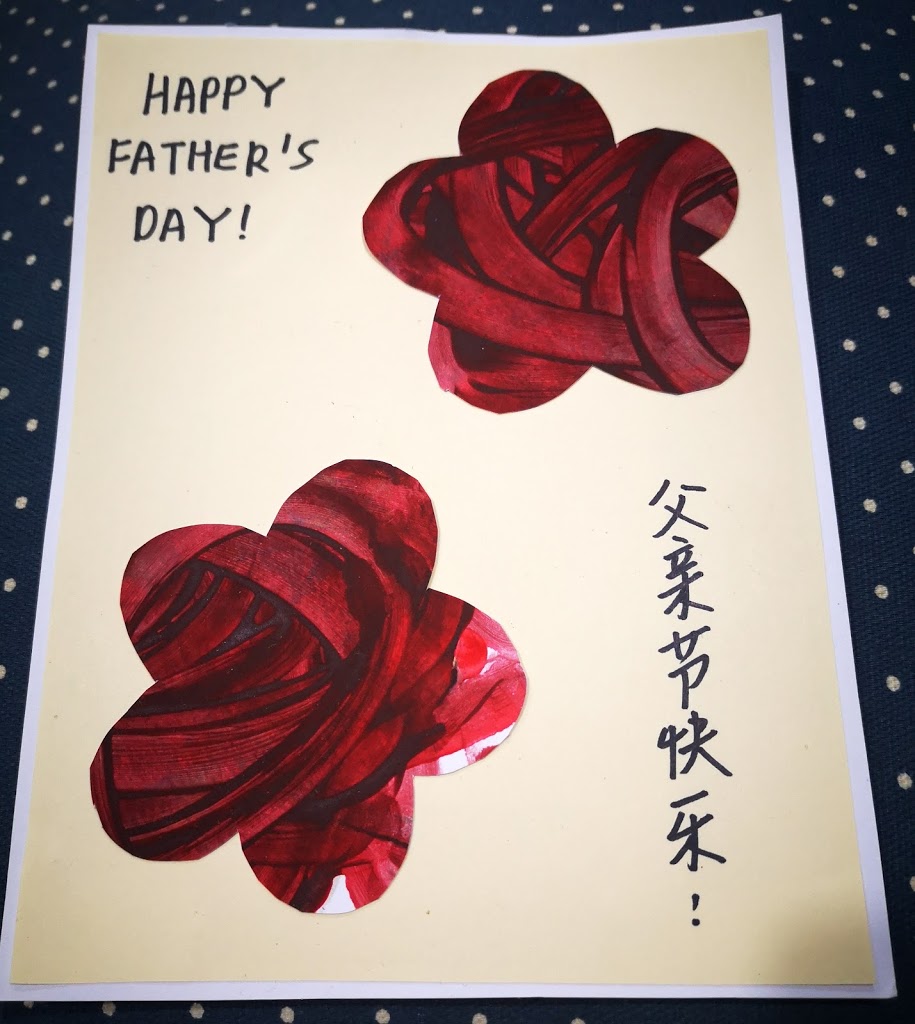 From Safety to Love: Fostering Perspectives on Fathers’ Day

I examined the little card. It had two red flowers cut out of paper, with Fathers’ Day greetings written in both English and Chinese. A simple card, ordinary in many ways, and probably one of the many made by children around the world for their fathers on this special day. But this card was different. It was found in the school bag of a child who probably doesn’t fully understand the meaning of the words “father”; a child who has had his whole world shaken up when his birth parents couldn’t take care of him and when he ended up first as a ward of the state, and then as a newcomer in a completely different household. The card belongs to K, the scared little boy who first entered our home some seven months ago. And I am his foster father.

“In the early years, everybody had starry eyes,” Federici says. “They thought loving, caring families could heal these kids. I warned them: These kids are going to push you to the breaking point. Get trained to work with special-needs children. Keep their bedrooms spare and simple. Instead of ‘I love you,’ just tell them, ‘You are safe.’

“The most successful parents, he believes, were able to focus on imparting basic living skills and appropriate behaviors.”

I believe that was what happened with K. Coming from a family of origin where there was no physical and emotional stability, he and his brother were operating from a survivalist mode. It was every boy for himself, as they snatched, hit, bit and screamed their way to get the things that they wanted. Every sentence was punctuated with the words “I want” and “Mine”. After all if K was not fast enough to get the food, his brother J would have snatched it away from him. And that was after J had already eaten his own sizeable portion of food.

As such, the first few months were about creating a safe environment of rules and routines. This was in essence a complete re-wiring of everything the child had experienced. The children came from an environment of great unpredictability. They were unable to read the emotions of their birth family, and lived in a constant state of uncertainty and anxiety. When we imposed rules and routines at the onset of the foster placement, we were conveying to them that they were now living in a different home. While some of these rules may have been strict to them at first, however as time went by, they learnt that as long as they kept within the rules and routines imposed by us, that they were free to be themselves. This is the paradox of fostering; that a strict routine provides a safe environment that is predictable to the foster child. And once there is predictability, the foster child is then able to explore his emotions and the world around in a safe and secure manner.
In the two months since K’s brother left, we have observed another aspect of his development. Gone are the snatching and biting behaviours displayed at the start of his placement. Instead, we hear K physically speaking more, and attempting to inject himself more into the fabric of our family. For instance, when we were discussing where to go to “celebrate” the dining out phase following the end of the Covid circuit breaker lockdown, we heard a tiny but clear voice from the back of the car. “Chicken rice, please.” Then again later when Sue was asking our two boys what fruit they would like after dinner, we heard that same determined voice. “Banana, please.”
Our 3-year-old foster child had learnt how to individuate and express his desires in a clear yet undemanding manner.
We are only human. While many of us foster parents choose to love our foster kids because we feel sorry for them or their birth circumstances, such feelings of love may sometimes give way to exasperation or grief when the foster kid tears up your favourite book or destroys your grandmother’s antique porcelain plate. For us the initial months with K were hard as he and his brother seemed to be destroying all semblance of normalcy in the home. Everyday was a tussle which was peppered with lots of tantrums and displays of disobedience. And while I admit it was hard for me to love them in relation to the touchy-feely sense of the word, the love that I had for them stemmed more out of responsibility and also a desire to change their behaviour from the inside.
However, as the months went by, and following J’s departure from our house, K began to display more and more signs of affection, and I believe this change in disposition was likely a response to the change in physical environment that he was now encountering. He was feeling safe; and he was now able to experience what it meant to have love and intimacy.
But love and intimacy does not come from thin air. Developmental theories largely link these emotions to that of healthy attachments. This builds on the entire body of literature discussing attachment theory, a concept I had written about in my previous blog posts. Consequently, it seemed that K needed to feel a sense of safety before being able to attach to our family, which resultantly caused him to feel love and desire greater intimacy with us.
The advent of Fathers’ Day in Singapore coincided with the post-Circuit Breaker Phase Two opening of the economy. As our family went out for our first evening meal following the resumption of outdoor dining and the opening of playgrounds, little K tagged along without any additional attention drawn to him. He ate with us, played with the older boys, and ran around just like any other member of our family. From the outside, nobody would have guessed that he was a foster kid; one who has a whole host of emotional baggage trapped within.  From that perspective, Fathers’ Day has taken on a whole new meaning for me. I know I am not only a father to my two older boys, but for this season, I represent everything that the word “father” should mean to little K. And I need to continue demonstrating what it means to be a father; for only then would the little boy continue to feel that he is being protected by us, and only then can he develop in a more healthy manner in all the other aspects of his life.